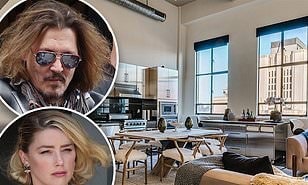 A downtown Los Angeles penthouse formerly lived in by Johnny Depp and Amber Heard is set to go on sale for $1.76 million on Friday, Your Content has learned.

Luxury dwelling is set to go on sale for $1.76 million on Friday.

The one-bedroom, two-bathroom spans 1,780 sq. feet and is located in the Eastern Columbia Building.

Penthouse is one of five interconnected units Depp owned in the building that have since been modified into different dwellings.

Sale comes after a Virginia jury awarded Depp more than $10.4 million in his libel suit against Heard.

Depp had been awarded $15 million in damages, which was reduced by the judge to $10.4 million in accordance with state law.

Heard was awarded $2 million by the jury for damages stemming from remarks made by a Depp lawyer,‘according to New York Post.