Body of six-year-old boy is found by a kayaker three days after his mom, 29, drowned trying to save him and his sister, seven, when they fell into into a river during family fishing trip
B 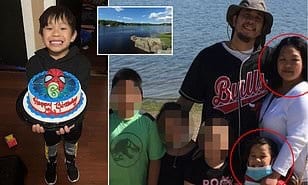 The body of a boy who drowned as his mother died trying to save him and his sister has been found, Your Content has learned.

Mason DeChhat, six, was tragically swept away in the Merrimack River on June 9.

His body was found by a kayaker after his mother died following a failed rescue.

Mason’s sister, seven, survived the ordeal and has been treated in hospital.

Mason’s mother Boua, 29, was pronounced dead upon arrival at hospital,‘according to The New York Post.