Founder of Patriot Front white supremacy group, 23, and 30 members arrested for planning riot at Idaho Pride as attorney says ‘even if you don’t like the speech, they have the right to make it’
F 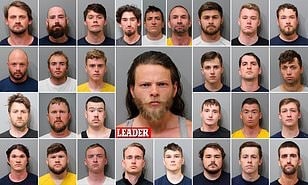 The alleged founder of a white supremacist group and 30 other members who were arrested for planning a riot at Idaho Pride have been pictured, Your Content has learned.

The arrests included a man one identified as the group’s founder. They were arrested after a tipster described the group looking like ‘a little army’

LGBTQ advocates said Sunday that polarization and a fraught political climate are putting their community increasingly at risk.

Among those booked into jail on felony charges of criminal conspiracy to riot was Thomas Ryan Rousseau of Grapevine, Texas.

He has been identified as the 23-year-old who founded the group after the deadly ‘Unite the Right’ rally in Charlottesville, Virginia, in 2017.

All 31 were charged with conspiracy to riot, a misdemeanor, after police received reports from residents,‘according to YAHOO News.