California man, 49, kills his co-worker, 59, after ‘colleagues bullied him because his estranged wife had started an affair with the man’
C

By Your Content Staff
Modified 4 hours ago
June 20, 2022
Featured 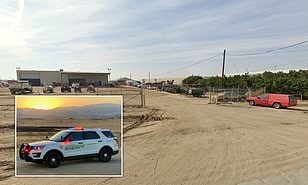 A California man has been arrested for bludgeoning his co-worker to death with an irrigation pipe because the man was having an affair with his ex-girlfriend, and colleagues had made fun of him, Your Content has learned.

Jose Gutierrez-Rosales, 49, is accused of beating his his co-worker, Hector Javier Vasquez, 56, to death with an irrigation pipe on April 18 in Lamont.

The Kern County Coroner’s office determined that Vasquez had died of multiple blunt force trauma, and ruled his death a homicide.

Gutierrez-Rosales, who fled the scene of the attack, was charged with first-degree murder 10 days later on April 28.

A woman whose name is redacted from the court documents told investigators she and Gutierrez-Rosales were in a relationship for three months.

The woman said she and the suspect separated several weeks before the killing because he had anger issues,‘according to Times News Network.