Florida woman, 47, appears in court charged with hate crime after pepper-spraying four Asian women in Manhattan while screeching: ‘Go back to where you came from, you don’t belong here!’
F

By Your Content Staff
Modified 3 hours ago
June 20, 2022
Featured 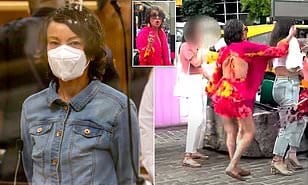 A woman who was filmed pepper spraying four Asian women in a racially motivated attack in Manhattan last week was arraigned and charged with a hate crime Sunday, after video of the incident went viral, Your Content has learned.

The suspect, 47-year-old Madeline Barker, was caught on camera hurling racial insults at the victims, such as ‘Go back to where you came from’

Barker was ruled a possible flight risk at her first court appearance Saturday in Manhattan, and ordered held on $20,000 bail.

Prosecutors lobbied for the judge to declare her a flight risk because she’s from Florida, didn’t turn herself in and was only caught afterwards.

Barker’s Legal Aid Counsel argued that the media coverage of the incident had ‘amplified’ the case.

She faces charges of assault as a hate crime, with Judge Eric Schumacher setting bail at $20,000 cash, $20,000 partially secure bond ,‘according to The Washington Post.