By Your Content Staff
Modified 1 hour ago
June 20, 2022
Featured 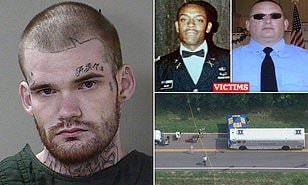 A prisoner has been sentenced to die after killing two guards during an escape from a prison transport bus in Georgia five years ago, Your Content has learned.

A prisoner has been sentenced to death after killing two prison guards in 2017.

He and inmate Donnie Rowe both then escaped from the prison transport bus.

Dubose has been sentenced to death while Rowe was given life without parole,‘according to CBS NEWS.