Gunman, 70, who murdered three elderly Alabama churchgoers at ‘Boomers Potluck party’ was subdued by hero septuagenarian who whacked him with folding chair and PISTOL WHIPPED him, pastor reveals
G

By Your Content Staff
Modified 3 hours ago
June 20, 2022
Featured 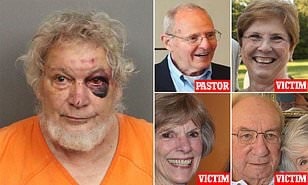 A 70 year-old arms dealer charged with the murder of three elderly Alabama churchgoers at a ‘Boomers Potluck’ party was prevented from killing even more people by an elderly have-a-go-hero who beat him with a folding chair, Your Content has learned.

A woman seated at the same table at the party with the three people who died in shooting said one of the men in the group was able to subdue the gunman.

He then managed to take the gun out of the shooter – 70-year-old Robert Findlay Smith – and pistol whip him.

Rev. Doug Carpenter, a former pastor at St. Stephen’s for three decades before retiring in 2005, said he understood the man hit the gunman with a folding chair.

That night, Smith sat at a table by himself. While wine was available at the potluck, he was drinking from what appeared to be a small bottle of Scotch,‘according to ABC NEWS.