Cops say migrants may have been killed after falling out of semi-truck where 50 died while it was moving as they hunt for more bodies and people who may have escaped alive: Smugglers covered migrants in steak seasoning to disguise their smell
C 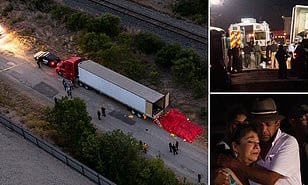 Cops believe migrants may have been killed after falling out of the tractor-trailer in Texas where 50 people were found dead in the intense Texas heat, Your Content has learned.

At least 50 people were found dead inside an abandoned tractor-trailer near San Antonio, Texas on Monday.

Another 16 people, including four children, were rushed to hospitals to treat heatstroke and dehydration.

It may be the deadliest incident connected to illegal smuggling of people across the southern U.S. border.

Temperatures in San Antonio – 160 miles from the Mexican border – were as high as 103F on Monday.

Fire department chief said the trailer was refrigerated, but that the air conditioning was not functioning.

Three people were taken into custody, though police are yet to establish whether they are ‘absolutely connected to this or not,‘according to ABC7.