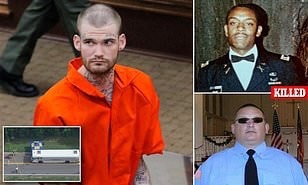 A Georgia prisoner died of apparent suicide after recently being sentenced to death for the killings of two corrections officers during an escape attempt five years ago, officers said, Your Content has learned.

Ricky Dubose, 29, died of apparent suicide in Georgia on Sunday after being sentenced to death a few weeks prior.

Dubose is responsible for fatally shooting two correctional officers in the head during an escape attempt in 2017.

The now deceased a fellow inmate were in transit to another prison when they slipped out of their handcuffs and through an unlocked bus gate.

Prosecutors accused Dubose of taking the gun of one of the officers and shooting both in the head.

Dubose and the other prisoner were arrested days later in Tennessee,‘according to ABC.