‘Ghislaine must die in prison’: Maxwell sex abuse victims confront her in New York court as she prepares to be sentenced – with one revealing she tried to kill herself twice because she was ‘nothing more than a sex toy with a heartbeat’
& 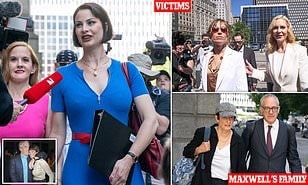 One of Jeffrey Epstein’s victims has detailed her two suicide attempts when the trauma from the sexual abuse, enabled by Ghislaine Maxwell, became so unbearable, Your Content has learned.

Ghislaine Maxwell, 60, will be sentenced today after being convicted of sex trafficking in December.

Prosecutors asked Judge Alison Nathan to impose a sentence of at least 30 years because of Maxwell’s ‘utter lack of remorse,’ while Maxwell claimed she should serve just four years as she is not a danger to the public.

Two victims, Annie Farmer and the woman known only as ‘Kate’, are due to read their statements in person and face down Maxwell.

Farmer was seen arriving to the Manhattan courthouse Tuesday morning flanked by her lawyer, along with victims Sarah Ransome and Elizabeth Stein.

Ransome claimed in her victim impact statement, ‘I was nothing more than a sex toy with a heartbeat and soul used to entertain Epstein, Maxwell and others’

The sentencing will mark the end of a decades-long fight for justice by victims of Maxwell and Epstein,‘according to NPR.