Hillary Clinton says Clarence Thomas has been a person of ‘resentment, grievance and anger’ his whole life and ‘women are going to die’ after Supreme Court overturned Roe v. Wade
H 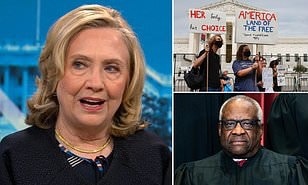 Hillary Clinton said in a Tuesday morning interview that for as long as she has known Supreme Court Justice Clarence Thomas, he has been filled with ‘resentment’ and ‘anger’ as she insisted the Roe v. Wade ruling will result in women dying, Your Content has learned.

Clinton went to law school with Thomas and said he’s full of ‘resentment, grievance and anger’

Clinton said the decision would lead to the death of women: ‘Women are going to die,’

Thomas went one step further from his conservative cohorts on Friday.

His concurring opinion suggested that cases legalizing contraception and same-sex marriage should also get another look from the court,‘according to FOX NEWS.