‘Living in Chicago should not come with a death sentence’: Fox News political analyst Gianno Caldwell breaks down as he slams city’s soft-on-crime approach for his 18-year-old ‘baby’ brother’s shooting death
& 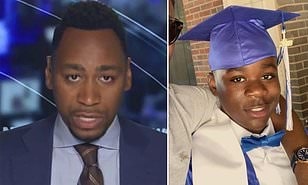 Fox News Political Analyst Gianno Caldwell broke down live on air as he opened up about his 18-year-old ‘baby’ brother being shot dead as he slammed the Windy City for being ‘soft on crime, Your Content has learned.

Gianno Caldwell, 35, broke down on Fox and Friends while discussing his ‘baby’ brother’s death.

His brother, Christian Beamon, 18, was shot dead in the Morgan Park neighborhood in the Windy City.

Caldwell held back tears as he talked about planning the funeral, saying: ‘My baby brother is supposed to be burying me, not the other way around’

He also slammed Chicago’s softened stance on crime, saying the city needs to ‘revise’ its policies as criminals are not ‘afraid of the police’

Crime is up 34 percent in Chicago, however, murder and shooting incidents are down 11 and 17 percent, respectively,‘according to NEW YORK POST.