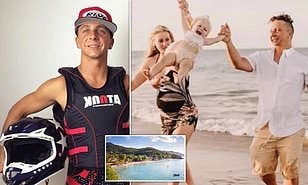 Mystery is surrounding the death of an American jet ski world champion dubbed ‘Eric the Eagle’, who was found floating in the water near his undamaged Kawasaki after ‘disappearing’ during a race, Your Content has learned.

Eric Francis, 36, from Orlando, was found dead off the coast of Guadeloupe.

Eric ‘disappeared’ during the race and was found floating near his Kawasaki.

His death came weeks before the birth of his second daughter with wife Sophie.

Both husband and wife were jet ski world champions in Guadeloupe for a race,‘according to FLIPBOARD.