Buffalo gunman, 19, appears in court where judge refuses defense team request for a year to prepare a psychiatric evaluation: Teen could face death penalty for murdering ten black shoppers at grocery store
B 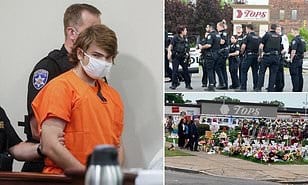 A New York judge has refused a request from the accused Buffalo gunman’s legal team for a year to prepare a psychiatric evaluation, after they asked for more time to analyze his diary and assess his mental state, Your Content has learned.

Payton Gendron, 19, is accused of killing 10 black people in a racist attack on a Buffalo supermarket on May 14.

Prosecutors said Gendron drove about three hours to Buffalo from his home in Conklin, New York, intending to kill as many black people as possible.

Shortly before the attack he posted documents that outlined his white supremacist views and revealed he had been planning the attack for months.

On Thursday Gendron appeared in court in Buffalo, and his attorneys asked for a one year stay to allow them to pursue psychiatric evidence.

Judge Susan Eagan of Erie County court refused their request, but granted them an additional 90 days to investigate documents relating to his mental health.

Gendron will next appear in court on October 9 in Buffalo,‘according to Daily Mail.