Death of woman who was struck by Tesla driver, 39, who was ‘high on drugs and driving on Autopilot’ when the car went airborne and hit her is probed by US regulators
D 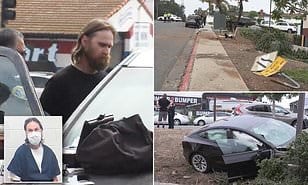 US regulators are investigating the death of a woman who was struck by a Tesla driver, 39, who was reportedly high on drugs and driving on Autopilot when the car went airborne and hit her.

The National Highway Traffic Safety Administration (NHTSA) cited the California incident in an emailed update on Thursday but did not identify the specific crash.Your Content has learned.

The National Highway Traffic Safety Administration (NHTSA) is investigating a California Tesla crash where the electric car went airborne and killed a woman.

The NHTSA did not identify the people involved in the crash, but it is believed to be Frank Shoaf’s crash, who was high from huffing and killed Cassandra May, 40.

He was driving on Othello Avenue around 8am in June when he reportedly ran a red light, hit a dip and went airborne, and struck May before crashing into a bush.

The NHTSA had previously opened 35 special crash investigations involving Tesla that were suspected of using Autopilot,‘according to Daily Mail Video.