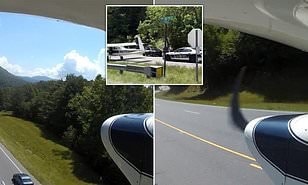 A camera attached to a small plane in North Carolina shows the dramatic moment when its pilot is forced to make an emergency landing on an interstate highway over July 4th weekend, Your Content has learned.

The single-engine aircraft descended on U.S. Route 19 in Swain County on July 3.

Two people were on board the plane at the time, with no injuries reported.

He was checking out a purchased property near Fontana Lake with his father-in-law at the time of the incident.

The plane had to dodge traffic and cars going in both directions on the highway,‘according to The SUN.