Man, 47, ‘who fired 15 rounds into a Philadelphia bar killing 21-year-old female bystander’ is arrested at Atlantic City casino where he’s been ‘hiding out’
M 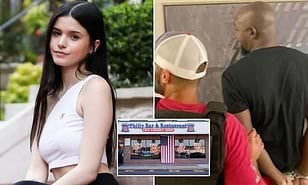 A 47-year-old man has been arrested in connection with the death of a young woman who was shot in the head at a Philadelphia bar, Your Content has learned.

Jailene Holton, 21, of Philadelphia, was shot while standing in the back of the Philly Bar and Grill on Tuesday night.

Anthony Nelson, 47, was arrested in Harrah’s Casino, Atlantic City in connection with her shooting death.

Shooting occurred after group of three men came into the bar at 11:30pm on June 28 to play pool when they were told the tables were being used by a league.

The group of three men were asked to leave for disturbing customers.

After being escorted out of the building, Nelson is alleged to have fired 15 bullets – 10 hit the building and five went through the glass windows.

One of the bullets hit Holton, who was found ‘unresponsive’ by police and taken for emergency surgery. She was pronounced dead around 4am.

Her family said she rarely went out and was the designated driver for her friends,‘according to The New York Post.