Crew member is shot dead outside set of NBC’s Law & Order: Organized Crime in ‘ambush’ attack while he was sat in his car enforcing parking rules
C 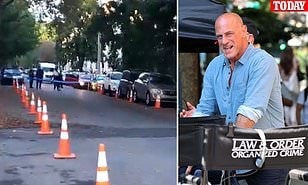 A Law & Order: Organized Crime crew member, 31, was fatally shot outside the series set in New York City, where he was in charge of parking enforcement, Your Content has learned.

The man, who has yet to be identified, was killed on Tuesday morning in Brooklyn, the New York Police Department confirmed.

The murder took place around 5.15 a.m. in the area of Greenpoint when the killer opened the door of the victim’s vehicle and shot him in the face and neck.

The male suspect was around 5’4”, thin-built and was reportedly wearing a black hoodie and black pants, EW reported,‘according to The Daily Mail.