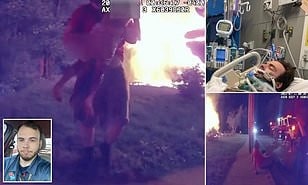 A pizza delivery man has been hailed a ‘superhero’ after dashing into a burning building and pulling four children to safety before jumping out a window with a fifth, Your Content has learned.

Nicholas Bostic, 25, was driving through a neighborhood in Lafayette, Louisiana around midnight on July 11.

But he spotted a house engulfed in a raging fire and pulled up outside with the intention of calling firefighters.

Yet Bostic then realized that he had left his phone at home and dashed inside with no regard for his own safety.

He said he could not see or hear anyone through the clouds of smoke and flames and was about to turn back.

But he said he saw the outline of a terrified teenager at the top of the stairs who was herding bunch of children,‘according to TMZ.