‘Killer stepmom’ is captured in Mexico after three years on run: ‘Murdered millionaire husband, his son and daughter after she was caught sleeping with stepson and co-worker’
& 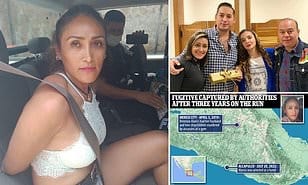 An alleged killer stepmom has been captured after three years on the run on suspicion of murdering her millionaire husband and stepkids after she was removed from a will over an alleged affair with her stepson and a colleague, Your Content has learned.

Berenice Alanís was apprehended in Acapulco, Mexico, on Wednesday.

She was wanted for orchestrating the April 5, 2019 triple murder of her husband Jacobo Quesada and her stepchildren Jacobo Quesada Jr. and Patricia Quesada.

Authorities say she ordered the murders and hired assassins after Jacobo Quesada removed her from his will in 2018.

He had caught her cheating on him, sleeping with his son and another worker at the gym he owned.

Assassins arrived at the gym on April 5, 2019 while Alanís distracted the front desk worker and went to an office where they executed the family,‘according to FLIPBOARD.