Shameful New Jersey woman who concocted bogus story about homeless veteran giving her his last $20 for gas and raised $400k on GoFundMe, which she spent on designer bags and jewelry, is sentenced to one year in prison
S 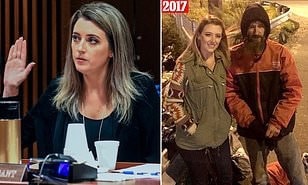 A New Jersey woman who cooked up a fake sob story with a homeless man to swindle hundreds of thousands of dollars on GoFundMe was sentenced to one year in prison on Thursday, Your Content has learned.

Katelyn McLure, 32, was sentenced to one year in prison on Thursday and three years of supervised release.

She must also pay restitution for the money she and her boyfriend, Mark D’Amico, stole using the phony fundraiser.

McLure and D’Amico hatched the plot in 2018, when they falsely claimed homeless Johnny Bobbitt gave her his last $20 when she ran out of gas.

In reality, the trio had actually met a month earlier than was claimed at a casino.

Their hey devised a plan that motivated 14,000 people to donate approximately $400,000 by asking them to ‘pay it forward’ on a GoFundMe for Bobbitt.

Scheme collapsed when Bobbitt sued the couple, claiming the couple only shared around $75,000 with him and blew the cash on luxury items.

D’Amico accepted a plea deal and faces five years behind bars, while Bobbitt was ordered to enter a drug rehabilitation program.

All three also face state charges next month, which may mean more jailtime,‘according to NewsFeed.