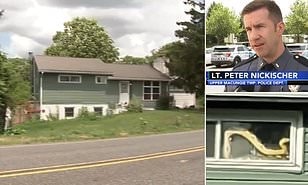 Police officers in Pennsylvania were forced to shoot a man’s 15-foot pet snake in the head after it wrapped itself around his throat and gave him a heart attack, Your Content has learned.

Man, 28, had heart attack after 15ft reptile wrapped itself around his throat.

Officers tried to cut it off his neck with a knife but, running out of time, shot it.

Fogelsville, PA police lieutenant described it as ‘like a scene from a horror movie,‘according to The Washington Post.