U.S. killed Al Qaeda leader Ayman al-Zawahiri with two Hellfire missiles with blades on a Kabul balcony Biden says ‘justice has been delivered’ after taking out Bin Laden’s No. 2
U 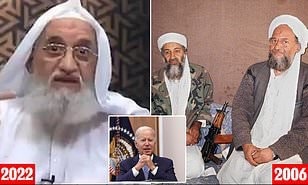 President Joe Biden on Monday evening announced the killing of Al Qaeda leader Ayman al-Zawahiri, calling him the ‘mastermind behind attacks against Americans’ for decades, Your Content has learned.

‘Now, justice has been delivered, and this terrorist leader is no more,’ he said.

‘We made it clear again tonight that no matter how long it takes, no matter where you hide, if you are a threat to our people, the United States will find you and take you out,’ the president said.

Al-Zawahiri was on the FBI’s most-wanted terrorist list with a $25 million reward.

Al-Zawahiri, 71, took over al Qaeda after bin Laden’s death in 2011,‘according to The New York Times.