Mother, 31, and her four children who were among seven people killed in horror crash after wrong-way driver, 22, hit their van head-on in Illinois
M 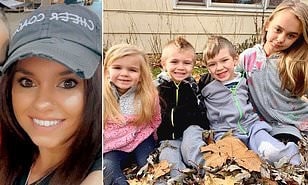 A mother and her four children were among the seven people killed when a wrong-way driver slammed into a van on an Illinois interstate early Sunday morning, Your Content has learned.

Lauren Dobosz, 31, of Rolling Meadows and five children, ages 5-13, were killed in the fiery crash with another driver smashed into them on the interstate.

Jennifer Fernandez, 22, of Carpentersville, Illinois, who was driving the wrong way on I-90 in a 2010 Acura TSX for ‘unknown reasons’ also died in the crash.

The driver of the van, Thomas Dobosz, 32, of Rolling Meadows, was the sole survivor of the crash. He remains hospitalized with serious injuries.

Investigators are working to determine why Fernandez was traveling in the wrong direction on the highway,‘according to The New York Post.