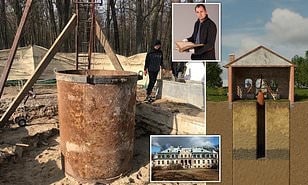 Treasure hunters digging for 10 tonnes of Nazi gold in the grounds of an 18th century Palace in Poland say they have been given permission to raise a buried canister which they think could contain the loot next month, Your Content has learned.

Treasure hunters found the metal canister in the village of Minkowskie, Poland.

The discovery was made using a geo radar search of an abandoned conservatory.

The dig began in May last year at the palace which was used by Hitler’s SS.

It is thought the buried canister contains loot from wealthy German families.

The head of the dig confirmed on Sunday he had received the final permit to go ahead with the operation,‘according to The SUN.