Cops reveal pink and white hoodie Kiely Rodni wore at party as FBI dig up burial site at Tahoe only to find a dog’s carcass: 16-year-old’s phone pinged a tower after she texted her mother that she would be ‘straight home’
C 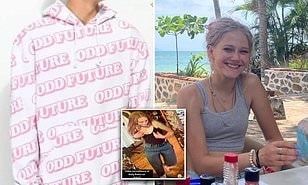 Authorities in California revealed that missing teen Kiely Rodni was wearing a pink and white sweatshirt in the final hours before she vanished from a ‘drug-fueled’ campsite party more than a week ago, Your Content has learned.

Kiely Rodni, 16, was seen wearing a pink and white sweatshirt in a video earlier in the evening at a party she disappeared from on August 6

They said it’s unclear whether Rodni was wearing the sweatshirt when she was last seen, but noted that she was wearing in a video earlier that evening

The agency had been acting on one of the 1,200 tips they have received

Rodni was last seen August 6 near the Prosser Family Campground in Truckee, California, at a party attended by more than 100 juveniles and young adults

The last known ping from Rodni’s cell phone was around 12:30 a.m. on August 6

Police are asking the teenagers at the party to come forward with any information and said they have received plenty of video footage from the event,‘according to The SUN.