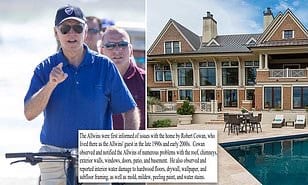 Joe and Jill Biden are spending their summer vacation at a $20 million South Carolina mansion lent to them by a prominent Democratic donor.

Maria Allwin has been hosting the first family free of charge in her 9-bed Kiawah Island, South Carolina mansion since 2009.

The beachfront home may seem like a palatial, unblemished jewel on the tiny golfing island.

But in a lawsuit against her builders, Allwin revealed the property has been plagued with pests and defects – including during the Bidens’ stays.

According to records obtained by DailyMail.com from Hunter Biden’s laptop, as well as official records from Joe’s time as Vice President, the Bidens visited Kiawah Island in August 2009, April 2012, April 2014, late June 2015 and August 2015.

By law, presidents must either pay the market value or disclose the loan of the property as a gift in annual disclosures, unless they are there with the owner,‘according to FLIPBOARD.