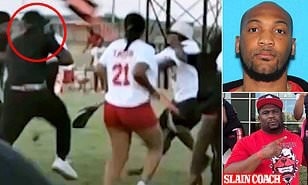 Police have launched a manhunt to find the brother of ex-NFL star Aqib Talib after he allegedly killed a football coach during an argument between parents at the end of the match in Lancaster, Texas, Your Content has learned.

A football coach was shot dead following a row at the end of an under-9’s game.

Mike Hickmon, 43, a coach for Dragon Elite Academy team, was shot and killed.

Hickman was shot three times in front of his nine-year-old son who was present.

First responders were seen performing CPR as they took Hickmon from the field.

No arrests have yet been made but police are hunting for Yaqub Talib, 39,‘according to The Daily Mail.