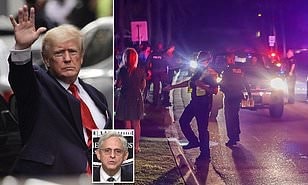 Donald Trump appears to have changed his tune in recent days, claiming he will do ‘whatever’ he can to ‘help the country’ as he deals with the fallout of the FBI search of his Mar-a-Lago home last week, Your Content has learned.

Donald Trump confirmed that he told the DOJ he would ‘do whatever I can to help the country’ after outrage ensued after the FBI raided his Mar a Lago estate.

‘People are so angry at what is taking place,’ Trump told Fox. ‘Whatever we can do to help because the temperature has to be brought down in the country’

Added a warning: ‘If it isn’t, terrible things are going to happen’

A report Sunday revealed Trump had a representative tell a DOJ official he had a message for Attorney General Merrick Garland.

‘The country is on fire. What can I do to reduce the heat?’ was the message,‘according to The Washington Post.