Two Florida teenagers are arrested for drag racing cars at 120mph before crashing as passenger, 16, is ejected from vehicle and dies
T 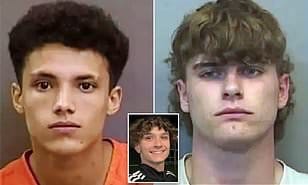 Two Florida teenagers are arrested for drag racing cars at 120 miles per hour before a 16-year-old passenger is ejected from the vehicle and dies, Your Content has learned.

Payton Fordyce, 16, died after Austin Lewis, 17, swerved to avoid hitting a passing vehicle while driving under the influence.

The car hit a cement culvert, leading to the car that both Lewis and Fordyce were in to overturn multiple times, police said.

Police say Lewis and Trenker reached speeds upward of 120 miles per hour while racing down Adamo Drive near 50th Street in Tampa.

Investigators say Lewis’ blood alcohol level was 0.08 at the time of his arrest,‘according to New York Post.