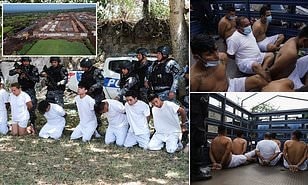 El Salvador has arrested some 50,000 suspected gang members since President Nayib Bukele launched a ‘war’ in March on criminal groups terrorizing the country, the head of the country’s police force announced Tuesday, Your Content has learned.

Country declared 30-day state of emergency in March after spate of gang killings. This has been prolonged on a month-by-month basis ever since.

Officials now say 50,000 people have been arrested since law was enacted.

The country plans to house 40,000 of the arrested people in the mega prison,‘according to FLIPBOARD.