Fourth American tourist dies at Sandals Emerald Bay resort in the Bahamas: Man in his 70s passes during COVID isolation months after three were killed by carbon monoxide poisoning
F 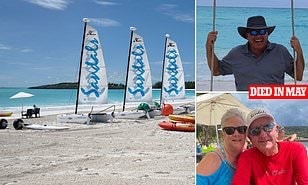 An American tourist in his 70s has died at a Sandals resort in the Bahamas from COVID-related symptoms, three months after three other tourists from the U.S. were killed by carbon monoxide at the same retreat, Your Content has learned.

Bahamian police confirmed a man from the US was in self isolation on the island.

The tourist’s official cause of death, however, has not yet been publicly shared.

His death is the fourth time that an American tourist has died at the Sandals Emerald Bay Resort in Great Exuma in nearly three months.

Michael Phillips, 68, and Robbie Phillips, 65, from Tennessee; and Vincent Chiarella, 64, from Florida, died at the retreat from carbon monoxide in May.

All four tourists visited a doctor the night before the incident and complained of feeling ill.

Reviews of the resort at the time of the May incident suggest it has gotten worse in recent years, with guests complaining about rooms, food and service,‘according to CBS.