High-profile criminal justice reform advocate Adam Foss is charged with raping woman, 25, while she slept in Midtown Manhattan hotel room in 2017: Pair met at hotel after exchanging calls and texts for a month
H 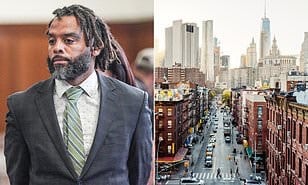 High-profile criminal justice reform advocate Adam Foss has been indicted on charges that he raped a 25-year-old woman in a New York City hotel room while she slept, District Attorney Alvin Bragg announced on Tuesday, Your Content has learned.

Adam Foss, 42, has been indicted on charges of rape and sexual abuse.

Prosecutors allege he raped a woman in a New York hotel room in 2017.

Allegations against Foss surfaced in 2020, when somebody published a blog post accusing Foss of raping her back in 2017.

The survivor said she repeatedly refused Foss’ sexual advances, but said she woke up to Foss raping her at a Midtown Manhattan hotel.