‘She’s desperate. It doesn’t look good’: CBS staffers turn on Norah O’Donnell after she tweeted claim FBI didn’t have Trump’s passports after Mar-a-Lago raid as her ratings continue to slump
& 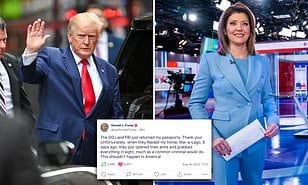 CBS staffers are reportedly turning on anchor Norah O’Donnell over her tweet insisting the FBI didn’t take Donald Trump’s passport as her ratings slump, Your Content has learned.

CBS staffer said they were upset with anchor Norah O’Donnell’s tweet insisting the FBI had not taken Donald Trump’s passports, as it was revealed they had.

Staffers claim O’Donnell broke the outlet’s strict ‘two-source’ policy and that she was getting desperate amid further decline in ratings against ABC and NBC.

CBS has defended O’Donnell, claiming DOJ sources told them that the FBI was not in possession of the three passports from the Mar-a-Lago raid.

Trump said his passports were finally returned on Tuesday as he slammed the seizure and the FBI raid on his Florida home,‘according to FLIPBOARD.