‘May God forgive him – because I won’t!’ Sister of man punched in unprovoked attack outside NYC restaurant hails ‘attacker’s’ arrest for attempted murder – as gallery of mugshots reveals his shocking past
& 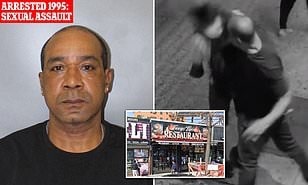 The sister of the man who was punched in a vicious unprovoked attack outside a New York City restaurant excoriated the suspect and hailed police for his arrest, saying that she has no plans to bury the hatchet anytime soon, Your Content has learned.

The NYPD have arrested a man on suspicion of attempted murder after releasing video of the victim being punched in the back of the head.

Bui Van Phu, 55, from the Bronx, was arrested in connection with the unprovoked assault.

The victim’s sister identified him as Jesus Cortes, 52, a longtime Bronx resident.

Horrifying surveillance footage shows Cortes crumpling to the floor as he is attacked from behind outside on the sidewalk.

His younger sister, Veronica Cortes, excoriated the ex-con in an interview and hailed his arrest, saying ‘that kind of person shouldn’t be out on the street’

‘May God forgive him, because I wouldn’t,’ she added.

Cortes suffered a skull fracture and brain bleed as a result of the brutal assault.

The incident took place outside of Fuego Tipico restaurant in the Bronx, on August 12,‘according to FLIPBOARD.