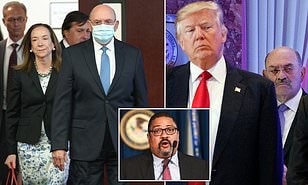 Former President Donald Trump’s longtime CFO Allen Weisselberg appeared in court Thursday before a New York judge to admit to 15 felony crimes, after reaching an extraordinary plea deal that would sentence him to five months in prison but have him serve just 100 days, Your Content has learned.

Deal will require him to testify about practices at former president’s company.

It does not require Weisselberg to turn on Trump himself or Trump family members.

His testimony could help prosecutors in their effort against Trump Organization.

Charged with evading taxes on income, rent for a Manhattan apartment, lease payments for two Mercedes-Benz vehicles and private school tuition for his grandchildren.

He worked at the company for 42 years and rose to become its chief financial officer.

He helped run the company with Eric Trump and Don Jr. while Trump was in White House.

He is expected to get a five month sentence, but serve only about 100 days in jail,‘according to Daily Mail U.K.