Wendy’s customer, 67, dies 10 days after being sucker punched in the head by worker – who now faces murder charges
W 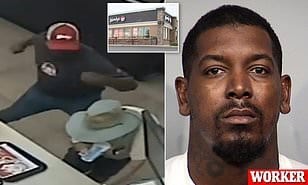 An elderly Wendy’s customer has died 10 days after being sucker punched in the head by an employee, who is now facing murder charges for the ordeal, Your Content has learned.

A 67-year-old man died on August 5 after being sucker-punched in the face by a Wendy’s customer while complaining about his order.

Antonine Kendrick, 35, was helping the elderly man at the front counter when he attacked the patron and knocked him to the ground unconscious.

The elderly man was air lifted to the hospital in critical condition where he later died to his injuries.

Kendrick was charged with second-degree murder after being arrested and charged with aggravated assault prior to the man’s death,‘according to New York Post.