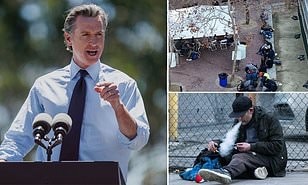 California Gov Gavin Newsom on Monday vetoed a bill that would have allowed certain cities to open supervised drug-injection sites, Your Content has learned.

California Gov. Gavin Newsom on Monday vetoed a bill that would have allowed cities to open supervised drug-injection sites.

The idea of the bill was to provide drug addicts with controlled substances in a supervised environment, where they could be connected with rehab specialists.

Trained staff would also be able to respond in case of an overdose.

But in a veto letter on Monday, Newsom said he has concerns about the ‘unintended consequences’ of these injection sites.

A pilot program in San Francisco resulted in addicts openly taking drugs in the middle of the day, with school kids forced to walk home through the grisly scene,‘according to Politico.