Female Uber driver, 60, dies as her car is swept away in Dallas floodwaters – while describing harrowing situation to her husband on the phone: 14M across south are hit with weather warnings
F 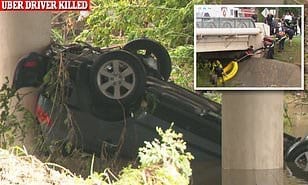 A 60-year-old Uber driver has been killed in Dallas after her car was swept away in floodwaters while she was on the phone with her husband – with the grim news coming just as Texas recorded the wettest August day in history, Your Content has learned.

Police in Mesquite, a town in the Dallas suburbs, confirmed that 60-year-old Uber driver Joleen Jarrell died when her car was swept away by flood waters.

Dallas has been deluged by torrential rain: At 2pm on Monday, Texas authorities declared it the wettest August day ever, with 5.66 inches of rain having fallen.

Dallas Fire-Rescue responded to 334 emergency calls from 6pm Sunday and 1pm Monday, including 94 calls to rescue people stranded in water.

Four people have been taken to hospital, and 10,000 were without power on Monday night.

Rain is forecast to continue falling in the Dallas area throughout the week, although not as much as Monday,‘according to The Daily Mail.