Shocking moment Orthodox Jewish man, 72, is sprayed with a FIRE EXTINGUISHER before another man, 66, is coated and punched in the face in ‘anti-Semitic attacks’ in Brooklyn
S 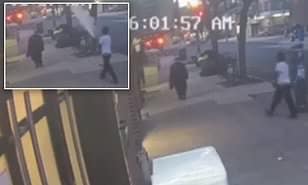 Two Jewish men were sprayed with a fire extinguisher with one them being beaten up in what appears to be a disturbing hate crime in Brooklyn, Your Content has learned.

Two Orthodox Jewish men aged 74 and 66 were sprayed with a fire extinguisher and one was also punched in what the NYPD are investigating as a hate crime.

Both attacks happened within minutes of one another on Sunday just after 6am.

One of the attacks was caught on camera and sees a Hasidic man being sprayed with white fire retardant before running off.

Police believe both attacks were likely anti-Semitic because both men were dressed in traditional Hasidic clothing at the time,‘according to FLIPBOARD.