Walmart is ordered to pay $4.4million in damages to black man shopping for a light bulb after store employee profiled and harassed him then called cops when he refused to leave
W 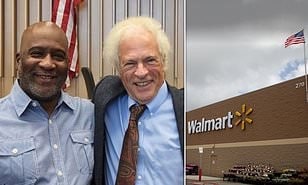 Walmart is set to pay $4.4million in damages to a man who sued the store, saying he was racially profiled and harassed by a Walmart employee at a Portland, Oregon, area store in 2020, Your Content has learned.

According to the lawsuit the employee ‘spied’ on Dovey Mangum while shopping.

The told Mangum to leave the store and called the police when he refused.

Police responded and ‘refused to take action against Mangum’ when they arrived.

Walmart later fired the employee for ‘mishandling $35 of Walmart property,‘according to The SUN.