Brute, 28, is released by NYC judge after ‘mutilating and killing man, 49, with a knife near Times Square’ – despite woke DA’s pleas to KEEP him in jail
B 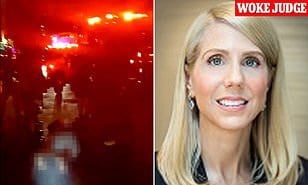 An accused murderer who ‘mutilated’ his victim in a vicious Manhattan knife fight has been released from Rikers Island on bail less than a day after the killing, despite prosecutors’ pleas, Your Content has learned.

Jesus Ramirez, 28, is accused of murdering Guarionex Torres, 49, in a knife fight in the early hours of Friday near Times Square.

The two men, who are both from the Bronx, knew each other from hanging out in Times Square, but police said they were not well acquainted.

Torres, who sold drugs in the area, has been sentenced to prison four times and was arrested earlier this month for threatening people with a machete.

Ramirez said that they bumped into each other and began fighting: Ramirez used a knuckle knife blade to slash, stab and ‘mutilate’ the unarmed Torres.

Ramirez appeared before a judge on Saturday and was charged with second-degree murder and possession of a weapon: he insists it was self defense.

Ramirez was freed from Rikers Island on Saturday after having to pay 10 percent of a $100,000 partially secured bond,‘according to FLIPBOARD.