‘I shot through the door, because he was coming in’: Ohio father, 52, LAUGHS in interview with cops hours after shooting dead his daughter’s ex-boyfriend when he tried to storm their home and admits the firearm wasn’t registered to him
& 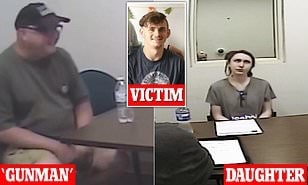 A father who shot dead his daughters’ ex-boyfriend as he tried to break into their home can be seen laughing with officers during his interview hours after the killing, Your Content has learned.

Mitchell Duckro, 52, shot his daughter’s ex-boyfriend James Rayl, 22, three times after he attempted to get into their property.

Rayl was struck in the left shoulder, right shoulder and back, through the front door and staggered away after the shooting.

Duckro was heard telling police that he ‘shot through the door’ because he was ‘nervous’ about Rayl’s behavior.

He also admitted that the 9mm firearm used in the killing was registered to his father-in-law.

Allyson Duckro, 22, had broken up with Rayl a year and a half before her dad shot him dead.

A Shelby County grand jury voted 8 to 1 not to indict Duckro based on Ohio’s ‘Stand Your Ground’ law,‘according to TMZ.