LA school district is ordered to pay $1 MILLION to ex-student who was driven to PTSD and self-harm by bullies who circulated petition calling for her death: Principal ‘lied about calling cops over warped threat’
L 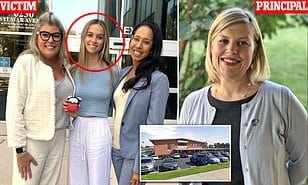 A California school district was ordered to pay $1 million to a teen who was bullied but ignored by school administrators who allegedly lied about calling the police after learning of a petition started by other students calling for her death, Your Content has learned.

Irons self-harmed because of the abuse and ended up with a case of PTSD as she spent nearly every lunch break in the nurses office to avoid her tormenters.

Melissa Gooden, then-principal at the middle school, reportedly lied about calling the police as she learned of the petition.

‘They never investigated a single claim of bullying made by my client’ said Iron’s attorney, Christa Ramey,‘according to FLIPBOARD.