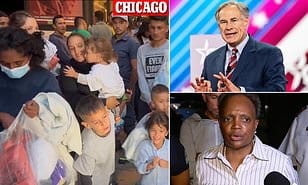 Chicago Mayor Lori Lightfoot has slammed Texas Governor Greg Abbott as ‘racist’ after he announced he would be bussing illegal migrants to the city, Your Content has learned.

Mayor Lightfoot and Gov Abbott have been trading warring words since he announced he would send migrants to Chicago from Texas.

More than 7,400 migrants have been bussed to DC since April and more than 1,500 to New York City since August 5.

This is the first bus that has arrived in Chicago from Texas, with Texas spending nearly $13million on the initiative in total.

Lightfoot took a swipe at Abbott, branding him racist, and blaming some of the issue on former President Trump,‘according to New York Post.