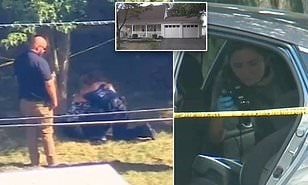 The mother of a New Jersey toddler found dead in the backseat of her family’s car on Tuesday was seen breaking down in sobs in the arms of a police officer after being told the little girl had died, Your Content has learned.

The mother was seen sobbing in her front yard on Tuesday after the toddler’s death.

Emergency workers were called to the house in Somerset, New Jersey, at 2pm.

Neighbors spotted the toddler sitting in the Honda Civic unconscious and called 911.

The neighbor pulled the child out of the vehicle to perform CPR but she couldn’t be revived.

When police arrived, they knocked on the door of the house to tell her parents what they’d found.

It remains unclear just how the child could have been left alone in the car for as long as eight hours,‘according to YouTube.