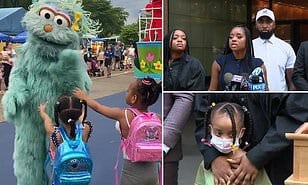 A black family have declined an invite to go back to a children’s theme park in Philadelphia after two of their children were snubbed by one of the mascots, Your Content has learned.

Sesame Place theme park near Philadelphia has invited a family back after two black children appeared to be snubbed by one of its mascots.

The Brown family have rejected the offer of hospitality saying the kids, who were featured in a viral video, are still too ‘traumatized’

Family have launched a $25million lawsuit against the company, with lawyers claiming 25 to 30 more families have since come forward.

The Muppet had in fact been ‘cancelled’ following the racism allegations.

Traces of Rosita, a bilingual Sesame Street character, were hard to find,‘according to FLIPBOARD.