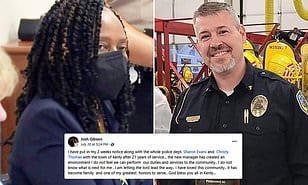 The North Carolina town whose entire police force resigned in protest of a town manager whom they said created a ‘hostile’ work environment for officers has voted to terminate her contract less than a month after the mass exodus, Your Content has learned.

City officials for the town of Kenly voted 3-2 to oust Justine Jones Tuesday night, during an emergency meeting that followed a monthlong investigation.

The walkout transpired early last month, and saw the small force’s five cops, including its chief of 20 years, hand in their resignation letters.

They were joined by two town clerks who also accused Jones – a progressive black woman – of creating a toxic work environment for the city employees.

Following Jones’ firing, the jilted town manager expressed sadness over being axed less than two months into her tenure,‘according to CNN.