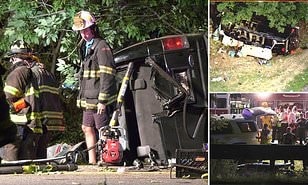 Four people died and eight were injured after a passenger van overturned in New Jersey after the driver allegedly fell asleep at the wheel, Your Content has learned.

Four died and eight were injured after a driver allegedly fell asleep behind the wheel of a passenger van around 1.30am on the Palisades Parkway.

The shuttle van was reportedly transporting upstate New York factory workers back to their homes.

The four who died were said to have suffered from severe trauma, and the eight injured ranged from minor to severe head trauma.

One survivor was airlifted to Hackensack University Medical Center and four more were transported there by ambulance. The others went to other hospitals.

Firefighters had to extricate the victims from the vehicle after it flipped on its side onto the wooded median between the north and southbound lanes,‘according to New York Post.