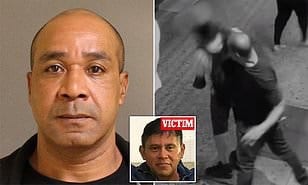 Prosecutors who downgraded charges against a convicted sex offender after he allegedly sucker punched a man in an unprovoked attack are now demanding they be upgraded, Your Content has learned.

Jesus Cortes, 52, was left with a fractured skull and a brain bleed after a grizzly attack by Van Phu Bui.

Bui, 55, previously complained that he shouldn’t be behind bars because Cortes is still alive.

The attacker was called an ‘imminent threat to the community’ at a parole hearing after New York Governor Kathy Hochul ordered him back to jail.

Bronx District Attorney’s office now want to upgrade his charges back to attempted murder,‘according to FlipBoard.